"But why?! Please...let me see my father! Before the whole world is devoured by darkness..."
—Reizeitei in Eikoden

Crowned Prince Boushin ( 芒辰 ), later known by the imperial name Reizeitei ( 礼清帝 ), is Hotohori and Houki's son and the future emperor of the Kounan Empire. Since his birth, Boushin and his mother have not spoken due to her mourning for her beloved Hotohori. It is because of this isolation that Boushin has never spoken a single word and it is only through his father's love and Taka's kindness that Boushin learns of his father's love for him and begins to speak.

As a Young Child

In Volume 15 of the manga, he is seen to be a quiet yet intelligent child.

As the 5th Emperor

Boushin has the characteristics of a proper emperor, though it is a push for him. When Houki and Boushin stopped grieving for Hotohori, Houki is willing to take Boushin's place while he is still learning things. Most of his traits are clearly inherited from his father, though he may cower and stammer a little at some times due to the feeling of insecurity. He has learned and had been exposed to Houki's braveness and boldness as an empress, however; it is from here where he has learned to act as a rightful emperor. When his regime is portrayed and shown in Eikouden, he seems to be a bold ruler who knows how to use his imperial power truthfully and rightfully; but when he cowers he has his mother by his side nearly always to help him get a hold of himself again. It is not a surprise that he wants to be around his father, whom he had last seen only as an infant. In the third OVA he has left many clues, which one is that he likes listening to stories about his father's adventures. When Mayo lies to him, however, he has the instinct of the knowledge that his father was a great and honorable man, and refuses to believe Mayo's false claim.

In the 2nd OVA, Boushin appears as a toddler who won't let anyone snatch away his doll, which is, in fact, the teddy bear Miaka gave to Hotohori in the main story. Hotohori is dead, Houki has not eaten a single thing and gone out of her room in half a year. Boushin has not spoken a single word either, but he seems to understand people and what they are saying. Houki is informed of Taka's memory jewels and tells them that she saw one during the time Boushin was born. Tasuki and the others start to open up Boushin. Since Hotohori was inside, he scolds them and tells them that he is not standing for the treatment. An attendant appears to feed Boushin, yet being under the control of Renhou, she brings out a knife, and prepares to slash Boushin but Chichiri protects him, taking the blow himself.

Boushin's teddy bear is found to be possesed by a demon which strangles the warriors and Nyan-Nyan in the Kounan palace, but the spirit of Hotohori possesses Boushin's body and destroys the demon with the holy sword. After Hotohori and Boushin are unable to touch each other, to this gesture Boushin cries and Houki, who is awake, turns away. Taka offers his body to Hotohori and Hotohori talks to Boushin and apologizes to how much pain he caused them. After this, Boushin says his first words :"Pa..Pa".

"But I really have no choice but to entrust my country's fate to you."
—Boushin, now known as Reizeitei, to Taka.

Boushin (now known as Reizeitei) has matured to the age of 12 and looks very much like his father. He is the emperor who now governs the deteriorating Kounan. After Mayo arrives at the palace, he entrusts Taka with the country's fate, which meant finding the Celestial Warriors in order to summon Suzaku and save the land.

When Mayo goes in the Suzaku shrine for the second time, Reizeitei asks her to tell him stories about the warriors and his father, but Mayo lies to him and tells him that they were horrible people. Reizeitei, however, sees through the lies and chastises Mayo, wondering aloud on how she could be the savior of Konan if she could say such horrible things about them, resulting in Mayo storming out.

During the final episode, Reizeitei's voice can be heard when Mayo and the warriors are now inside the shrine, finding a way to stabilize Mayo's condition and revive Eian. When Boushin hears his father's name, he pleads to see him, but Taka tells him that Hotohori isn't revived yet. When Hotohori is revived, Boushin and Houki embrace Hotohori tearfully. 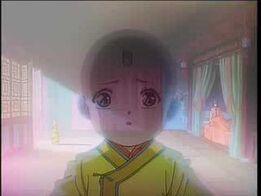 Boushin in the 2nd OVA 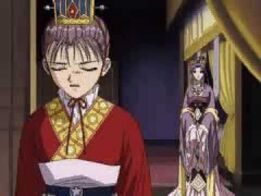 Houki and Reizeitei in the 3rd OVA
Community content is available under CC-BY-SA unless otherwise noted.
Advertisement