Fushigi Yuugi Wiki
Register
Don't have an account?
Sign In
Advertisement
in: Characters, Celestial Warriors of Suzaku, Male,
and 4 more

"Eveyone died, my friends, the villagers, my fiancee, my family. But it was very different with Hiko. It was like I was lost."
—Chichiri

Chichiri's eye color is red but a traumatic injury had fused his left eye shut and left a deep scar. For this reason, he wears a mask with a pleasant smile to make him more approachable, and symbolically hide his trauma. When Chichiri takes his mask off, a rare event in the series, it signifies a shift from his cheerful, care-free demeanor to an earnest and stern one.

He has blue hair, which was a light blond in the manga, with a cropped back and sides, spiked bangs, and a long section of hair tied back.

Chichiri wears a modest white tunic, dark green pants, and a red sash tied around his waist. Over this, he dons a dark-blue cape with white circles and a red beaded necklace with large green orbs. Both articles are used as tools to assist his spellcasting.

He also carries a Buddist staff and wears a large kasa hat while traveling, which can be used as a portal to escape dangerous situations.

Chichiri is a good-hearted man, always doing his best to be useful. He values his friends greatly, and goes through any length to protect them and ensure a bright future for Konan. He gives a lot of advice, helps the group and sticks the group back together when they seem to be torn apart; a very significant characteristic that reveals his wisdom and experience, natural seeing as he is the eldest of the group, older than Mitsukake by two years, and most of the others by about 6 years. Though he is actually very detached from the group when personal matters are involved and only opens up his feelings during extremely rare moments, he is, in general, cheerful and happy-go-lucky, and is the subject of numerous running gags in the manga and anime, making more jokes and acting funnier, much like Tasuki, than most of the other characters. Chichiri does show a very collected character, controlling his personal feelings and desires well, but in reality, he is a very troubled man with a past that is tearing him apart from inside. He was never shown revealing his true emotions, but he explodes immediately when two people are mentioned; Hiko and Kouran.

His favorite activity seems to be fishing, even though there isn't usually any fish.

Chichiri's scar is bigger and more explicit in the manga, and he takes the mask off more often than in the anime.

Chichiri first appears when Miaka and Nuriko, alongside with Tamahome, were ambushed by the Kutou soldiers wanting to kill Miaka. Chichiri pulls Miaka out of the dark forest when a bow was firing at Miaka. This saved Miaka, but when she turned around, she only sees a kasa hat and a face in the darkness.

Nuriko, Tamahome, and Miaka arrive at Tamahome's home village. After Miaka fetches some water for Tamahome's younger sister, Yuiren, (who came down fever), Miaka returns from an ambush in which she was saved by Chichiri, he gave her words of advice stating she needed to take responsibility for her actions or someone would get hurt. Chichiri then continued to follow them seeing that Tamahome's whole family, including Nuriko, was tied up to a big web made by the Kutou soldier who had managed to escape. At this point, Chichiri appears to break the web, and in the process, his knee-cap is torn and his mark as one of the Suzaku Seven is revealed. Chichiri then tags along with them, not troubling Miaka and the warriors to find him. When Miaka, Nuriko, and Chichiri were searching for the remaining warriors, Chichiri transports himself back to the palace and found then depressed emperor, Hotohori, who complains that he wants to accompany Miaka and protect her but he has a duty to the throne and therefore must stay. Chichiri then took the form of Hotohori, so that the emperor could be with Miaka. Hotohori moans saying that his eyes are "longer-slitted" than that of Chichiri's and his nose is far more graceful. Hotohori demands another form, but Chichiri says that it was as good as it was going to get, then Hotohori then rushes after Miaka and Nuriko.

Chichiri then appears when Miaka, Nuriko, and the newly-found Mitsukake , Chichiri and Tasuki were from the search. Since Chichiri took the form of Hotohori, Chichiri quickly transports the both of them and the court and imperial guards were surprised and Tasuki and Mitsukake pointed out that Hotohori was the emperor.

Chichiri then calls Miaka because of Tamahome in Kutou, and says that she and Tamahome can talk in the space Chichiri will create and all for a brief time. Chichiri then succeeds and brings Tamahome in the space and Miaka, oveflowing with joy, was very happy to see Tamahome again. Tamahome then says, "Meet me at the tree with the sweet-smelling flowers". Then they were off to Kutou.

Chichiri comes along withe Miaka and Tasuki, but was arrested by Nakago, (only found) Miaka was then led to the dungeon, and when she escaped, she met Yui and saw a completely different Tamahome, saying "Unmannered girl" and breaks her arm with his weapon. Chichiri then took the form of Nakago, but Nakago saw him, as well as the guards, and quickly ran. After Tasuki was beaten up by the controlled Tamahome, Chichiri was aware that Nakago built up a forcefield to block all of their powers. But Chichiri thought that Mitsukake's cat (Tama) isn't a servant of Suzaku, and then Chichiri successfully transmits the message through the cat in the Kutou palace, where the warriors were. Nuriko lets out a scream, making Chiriko rush over to them and say "that's the worst sound I have ever heard!" They found Mitsukake's cat floating with a red light and finally Chichiri is able to speak. "I'm only using this cat.. Because Nakago built up a forcefield I can't break... please break the barrier so we can escape." Hotohori then points out to Chiriko, and he plays a song with his flute, and successfully breaks the forcefield. They then return to Konan.

Later, in the summoning of Suzaku, Chichiri appears in the hall, along with the other Suzaku warriors.

He is once again seen along the journey to Hokkan.

Along with the other warriors, Chichiri finds the jewel memories, and his story is revealed at Episode 5 :Transcience of a water mirror. He saves Hiko from his demonity, prepared to sacrifice his own life in the process, and finally finds himself "atoned" for his past "sins". He is saved from Tasuki's flames by Taka in a joined effort between his two friends.

Chichiri plays a big role in the 3rd OVA. With Taka(Tamahome) and Tasuki, he searched for the reincarnations of the other warriors. He first appears on the wind, his robe and hat floating down to Taka, materializing using magic.

Chichiri was once acquainted with Hiko in the past. According to him, he killed him because of stealing his fiancee, Koran.

Hiko stole a kiss from Koran, which made it appear that she betrayed Chichiri. She broke off her engagement to Chichiri because of this, because she valued faithfulness quite highly, and this incident had made her feel unfaithful. She also died in the flood, alongside with his family. In the village flood which Chichiri was talking about, Mitsukake's family also died in the flood, leaving Mitsukake with only his lover, Shoka.

In Chichiri's light novel, the story delves deeper into that and into his own feelings of grief and self-doubt. After trying to end his own life, he's rescued by a girl called Koran, the same name as his dead fiancée, and is healed by her father as he struggles to come to terms with the fact he's survived death a second time. During this period of recovery, he is spoken to by Taiitsukun and guided to Mt. Taikyoku to begin training as a Celestial Warrior of Suzaku, although he doesn't know it yet.

Meanwhile, Nakago is hatching a plot to flood Seisen village, the place where Koran lives and her sweetheart, Shuusei, is conscripted to fight for Kutou. But when he discovers the plan to flood the village, he defects and runs home with the intention of warning them.

A few misunderstandings follow, but in the end, Chichiri finds his strength as a Warrior of Suzaku and uses the force of his determination to save Koran and Shuusei from dying in the same way his former fiancée, Koran, and his best friend, Hiko, had died years earlier. It is at this point he sees Mt. Taikyoku in its true form for the first time.

Chichiri has the ability to do magic. He was training under Taiitsukun for three years. Chichiri also wields a Shakujo staff, which he uses when doing magic.

He has the ability to impersonate someone, even Nakago. Chichiri's power is mainly magic, but he also has the abliity to create forcefields as well. His specialty seems to be transportation, as we see him transporting people from region to region, even country to country, as seen when he transports from the Konan palace, to the Kutou palace and back again. He can also make clones of himself. Chichiri is not much on the offensive side, but he has some few offensive power shown on the 2nd and 3rd OVA.

The weakness of his power to impersonate is that when you look straight into his face, you will see two con-cave lines and a convex line, and this is his trademark. He can also go into a chibi form people call "pint-sized Chichiri".

"Deep within my heart, there is a painful past. Even now, it aches, and once in a while, it sparkles."
—Chichiri in Ka Chou Fuu Getsu

Both Tomokazu Seki and Kappei Yamaguchi lent their voices to Chichiri's Vocal Collection, a compilation of songs sung by the fox-faced monk for the Fushigi Yuugi Soundtrack in both the anime and drama CD. 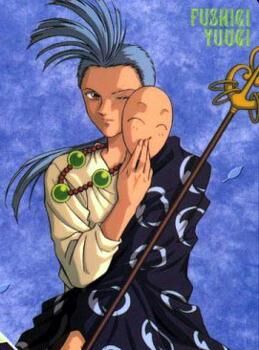 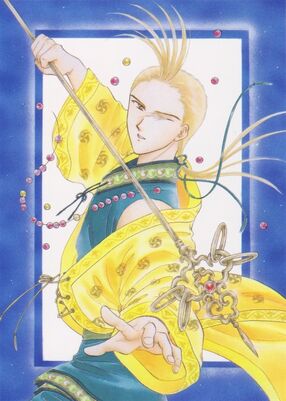 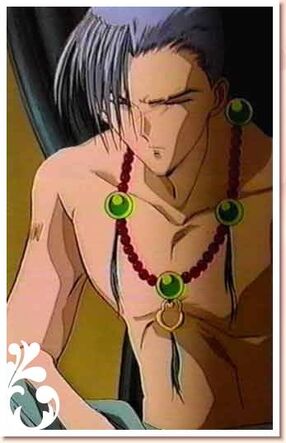 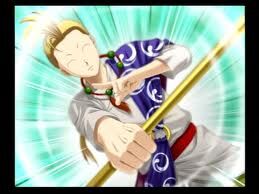 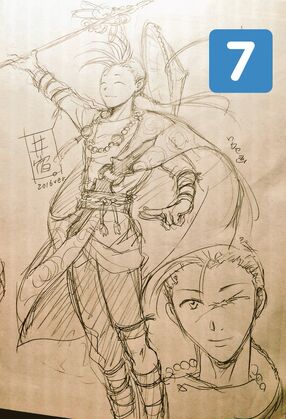