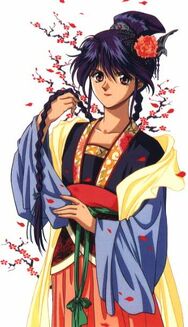 Crossdressing is the wearing of clothing and another accouterment commonly associated with the opposite gender of the dresser.

Nuriko poses as his deceased sister, Korin, as a coping mechanism to deal with his grief. He becomes more acclimated with the social and emotional roles of women in Ancient China. He asserts he is "a woman at heart." When he begins to properly process what happened to his sister while fulfilling his role as a Celestial Warrior of Suzaku, he discovers his desire to live as a man. But, even then, he does not conform to the typical male roles the other warriors portray. He is still the fashionable, fun-loving person only with a stronger sense of self. In a poignant moment, he cuts his hair, symbolically laying his sister to rest and coming into his identity as, in Tasuki's words, "simply Nuriko."

On the other, less character-driven end, when the Suzaku Warriors and Miaka find themselves on the all-female Nyosei Island, Chiriko proposes they dress up as women to avoid capture. In a comedic scene, the warriors unveil their feminine disguises. This gag is echoed in the short, "Fushigi Yuugi: The Tale of the Forbidden Women's Hot Spring Resort."

The character of Tamatama is a mentor figure to a young Nuriko, who is going by the name Korin, in the light novel. While his depiction is admittedly outdated for modern times, he is humanized by his desire to help the Celestial Warrior, find love with Tenbun, and his battle with loneliness and his identity as a cross-dresser.