"You see that Chichiri? That's how you murdered me!"
—Hiko

Hiko is the best friend of Chichiri who was killed in the storm that resulted in a flood. He also considers Chichiri as his enemy when he is reborn, and said that Chichiri just let him go, but in fact, Chichiri tried to save him but a tree crashed into his eye resulting in the scar on his face. He stole a kiss from Chichiri's fiancee, Kouran. Actually Chichiri saw them kissing, and was enraged at this. After that, a flood crashed into their village, killing Hiko and Kouran, leaving Chichiri completely filled with loneliness. Hiko later becomes one of the Four demon gods who is able to manipulate water.

Hiko's demon god name is Hang-ri, which was mistaken by Miaka as "Hungry" in the manga and demands him to hand over the food. Hiko is considered to be the second strongest of the demon gods next to Tenkou.

He has gold eyes which is very small, and the shade of his eyebrow is darker than a normal person's, this is to be suspecting of his demon god affiance. The lining of his eyes are also darker, as if he put on eyeliner. He , as a demon god, possesses bat wings that are adorned with fewer lines, which is revealed that he can control the bat wings as a bird can.

Hiko, as one of the Four demon gods, controls drought and flood over the two worlds. He also manipulates water as he wishes. Hiko's water abilities are particularly strong, and he is considered the second strongest among the Four demon gods.

See also: The story of Hiko and Chichiri

"I know! But it hurts to love her! You know it hurts!"
—Hiko

Chichiri announced his and Kouran's engagement to Hiko first, telling him that he would like Hiko to be the first person to know. Chichiri was hiding on a tree, holding a kind-of gift for him to give to Kouran and was wearing a big smile. But when he turned to look, Hiko and Kouran were already kissing,

and Kouran apologized and said that she can't be with him like he planned.

A flood followed and Chichiri held a knife over the neck of Hiko on a small rock-cliff and Chichiri told Hiko to give Kouran back. Suddenly Hiko slipped of the rock cliff and fell to the powerful waves and water currents the flood produced, and Chichiri held on to Hiko's hand. Chichiri let go, and another moment he planned to save him, but a tree crashed on him and gouged out his eye.

Hiko was never mentioned in the series, but was only clued at. Chichiri told the story of the flood, and "I killed my best friend because he stole my fiancee."

As the water engulfs the room, Chichiri asks hiko to show him self at that moment a bubble appears showing events of the past. Hiko hits Chichiri with a water blast and he tells Chichiri that if he wants Miaka he has to confront him once more and the water ball takes off through the sky.

Chichiri is unconscious and Nuriko says Taka "is still a basket case", Taka is holding out his hand in mid-air even if Miaka is already gone.

Back in Tenkou's world he is bathing in what looks like blood. Taka keeps trying to go after Miaka but they have to wait for Chichiri to wake up which he does at that moment. Chichiri tells the story and how he cannot bring himself to kill Hiko again and how a flood came shortly afterwards and wiped out his whole village and family.

Mitsukake mentions how he lost his family in the same flood and how everyone just wants to help, and he needs to "face his injury once again".

Taka volunteers to go, and Chichiri tells everyone that he will go. In Hiko's lair with water terraces, Miaka wakes up and speaks with Hiko . Hiko tells of his plan to put a spell on every one in both worlds. In the real world rain and flood warnings appear , and it's raining everywhere. While Yui is bathing she is engulfed by the water Hiko created to see her true feelings, but Yui just tells Miaka to be alright, and she will be praying for her.

Chichiri leaves and Tasuki and Taka goes with him. Chichiri and every one arrive to stop Hiko , and Chichiri boldly declares that when it comes to his friends of the Suzaku seven, he will fight Hiko. But they have to do it before Miaka drowns in the water ball Hiko created.

Taka and Tasuki are hit with water attacks and Chichiri sends an attack to Hiko, and Miaka tries to talk Hiko out of fighting Chichiri . Chichiri tells Hiko how he will save him, and tells Tasuki to burn the robe on Hiko even if it means killing him. Chichiri tells Hiko that he will not let go of him this time, as he holds Hiko's hand firmly. Hiko tells him that it will not work, and Chichiri's body is scarred many times, but he does not let go of Hiko. Flash backs of Chiriko's sacrifice delay Tasuki temporarily and tells Chichiri it's all happening again, but Taka snaps him out of it. Taka steps in and Hiko is defeated by Taka, Chichiri, and Tasuki. Hiko dies and the flash back of Kouran, Hiko and Chichiri's relationship is revealed, and Chichiri sorrowfuly tells him that he should not have let go no matter what. Hiko tells Chichiri that they were young, and he dies. His life

ends with the words "In water I shall return."

But in the last episode, Hiko is revived along with the others who were under Tenkou's spell.

In the Light Novel Shoryuu Den, Chichiri, Hiko, and Kouran's past are somewhat explained, and Hiko resembles Shuusei, the Boyfriend of Kouran ( she salvated Chichiri when he tried to drown himself in the river, and shares the same name of Chichiri's dead fiancee, Kouran. She also looks like her.) 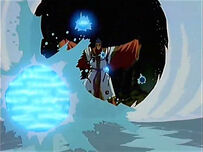 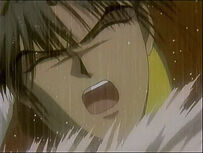 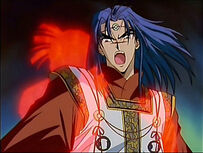 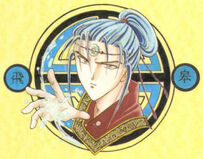