In the manga, it seems he has Heterochromia in both eyes, as they appear to be different in colors. However, this is not entirely certain, but in most of the drawings of him, one eye appears to be darker, though it was never revealed to Suzuno that she noticed any difference in his eyes.

Karumu was born as the youngest son of the more or less affluent Raotsue family from Sairou. When he was a little boy, however, his and his brother Kasaru's village was wiped away by a vicious sandstorm, leaving the Raotsue brothers as the sole survivors.

Karumu and Kasaru traveled together from then on, and Karumu decided to set his bad emotions aside as to not burden his beloved older brother. One of their travels led them to a slain caravan and its two survivors, Suzuno Osugi and Neiran.

"The sadness that comes when you lose something that is important to you ... My hometown ... was destroyed by an earthquake and a sandstorm. That's the kind of sadness that you don't want to acknowledge the most."

"I knew it!! Suzuno-chan you are the Priestess who has come from another world. The one who will summon the Divine Beast Byakko ... and save Sairou..." 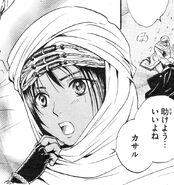