"Please! For the sake of those who’re waiting for you to come home... If you have any pride at all... then please... throw down your swords. I beg... you..."
—Madoka, to Konan soldiers

"I wonder whether it's serious or not. I probably end up reading it all if it actually did make dreams come true~"
—Madoka, to Misaki

"Survive. That’s not a request. It’s an order!"
—Madoka Ootori

Madoka Ootori is the main protagonist of the video game, Suzaku Ibun, respectively taking the place of Miaka as the Suzaku no Miko. She is an exclusive character of the game, along with Misaki Himuro, and they both appear solely on this installation of Fushigi Yuugi.

While Madoka's personality traits are mostly decided by the players, it seems that Madoka has a basic personality of her own. Prior to becoming the Priestess of Suzaku, it is shown that she is very lazy in regards to studies. She usually spend her time reading japanese comic books, and she is known for having low grades at school. She gets tired easily everytime she needs to study and, generally, she doesn't have any kind of interests towards books. Especially old books.

On the other hand, Madoka has a huge pro: just like Miaka she is extremely, fiercely devoted to the people she cares for. The main example is her affection and devotion to Misaki Himuro, her best friend and the Seiryuu no Miko. Madoka's main motivation in the game is to find a missing Misaki and reach for her so they can go back home, and she also comes to deeply care for the Suzaku Seishi as well.

As the heroine, Madoka has the ability to summon Suzaku once all of the celestial warriors of Suzaku has already gathered and has three of her wishes granted by Suzaku.


In Nuriko's route, it is shown that she also has Danger/Death Perception as her ability, in which she can sense the dangers that will take away the life of the people that are close or important to her forever, in the form of a very bad feelings that come to her.

Madoka and her friend Misaki Himuro were heading towards the library before cram school to continue studying for their high school entrance exams.

While in the library, Madoka finds The Universe of the Four Gods in the back of the Records Office and starts to flip through it after an intense studying session with Misaki. When Misaki questions her about the book and comments on how strange it is of her to actually be reading something so old, Madoka replies that she felt that the book was calling to her and that she also feels that the book was left especially there for her.

After reading the prologue of the story, she and Misaki are sucked into The Universe of the Four Gods where they both end up in Konan. There, they are chased by some suspicious men and in the end Misaki decides to lure them away while Madoka goes to find help. Unfortunately, she is caught by the men just outside of Konan, but she is saved by Tamahome. She begs him to help her find her friend Misaki, however Tamahome had already found her and left her in the market place since she had dislocated her foot.

When the two arrive Misaki is nowhere to be found. They go to search for her in the government office to see if she had been taken into custody by the guards, but once inside the soldiers start to behave strangely to Madoka and they ask her where she came from. When they learn she came from another world they take her to the palace, using brute force to tear her away from Tamahome and even drugging her.

"I'll do it... If you'll accept me, then I'll become the Priestess of Suzaku!"
—Madoka

After waking up, Madoka finds herself locked in a room inside the Konan Palace, where she worries over the events that have just occurred and the fate of Misaki and Tamahome. Suddenly, Tamahome overhears her and breaks into the room, telling her that they should continue their search for Misaki. As the two of them try to escape the palace, they are stopped by a soldier. Tamahome easily knocks the soldier out, and he starts to complain that the Konan soldier's are "too soft" and "nothing to be afraid of". Unfortunately, his commentary is overheard by more soldiers and Madoka and Tamahome are forced to run for their lives.

Just when it looks like things couldn't get any worse, they end up being surrounded by 30 soldiers prepared to attack, but they are saved when a door next to them is opened and someone calls out to them to hurry inside. Their savior is a lovely "woman" who offers to show them the way out of the palace. While Madoka is very grateful to their new ally, Tamahome is a bit wary of her, stating that he's sure that he's seen the girl somewhere before. In the end, however, they both decide to follow her.

When they reach the palace walkway, Madoka and Tamahome discover that they have been tricked by the woman and she had never really intended for the two of them to escape, at once Madoka notices that there are soldiers lying in wait for them. Tamahome decides then that he'll fight against all of them while Madoka escapes, but Madoka doesn't want to leave him alone, due to the fact that she feels guilty for abandoning Misaki and decides that she will protect Tamahome. As the soldiers start to launch an attack on Tamahome, Madoka cries out for them to stop and a blinding white light emits from her body. The "woman" then commands the soldiers to sheath their swords, and Tamahome realizes that this "woman" is actually a man, but not just any man: he is the fourth emperor of Konan, Saihitei or Hotohori. He then asks Madoka if she is alright and promises to explain everything to her at once.

Tamahome and Madoka are led to the throne room, where Hotohori apologises for tricking them, he then explains his reasons for doing so, explaining to Madoka the legend of the Priestess of Suzaku who would come from another world to save the nation when it is in danger and how he believes that she is that legendary girl, something which startles both her and Tamahome. Madoka learns that the danger the empire faces is against another empire, Kutou, which is putting diplomatic pressure on Konan, meaning that sooner or later a war could break out and the empire of Konan would stand little chance in surviving. Hotohori asks Madoka to become the Priestess of Suzaku and thus, save Konan. Before she gives him an answer, Madoka begs the emperor to look for Misaki, since she is worried for her friend. Hotohori promises to issue out a search warrant and Madoka promises to think about the offer of being the Priestess.

The next day, Madoka learns from Hotohori that he had received several eye-witnessed reports about a girl in strange clothing with her face hidden being led away by another person wearing a cloth over their face. However, both of them seemed to have vanished once they reached an alley. Thus, Misaki's fate becomes uncertain. Madoka, worried about her friend, asks if there is anything she can do to help, to which Tamahome reminds her that if she becomes the Priestess of Suzaku, she could have her wishes granted, one of which could be to find Misaki and return home. Madoka, knowing that Misaki believes in her, then decides to become the Priestess of Suzaku. 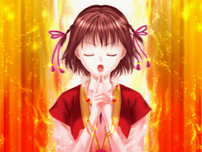 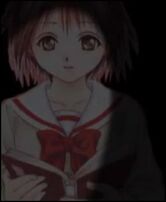 Madoka, in the opening