Nakago,(心宿) real name Gi Ayuru (Ayuru Gi) born under the constellation heart, is the first Seiryuu warrior to appear in the anime and manga.

He allows for no emotional distraction nor wasted action. Once someone's usefulness is exhausted, the person is eliminated. On the other hand, he has an undeniable charisma which allows him to skillfully manipulate people. He is considered the strongest Seiryuu warrior.

Nakago is very charismatic and easily strikes a mixture of awe and fear to whoever he comes across. Being a victim of sexual abuse from the emperor, he is ultimately withdrawn, silent (pensive), and appears oblivious and unconcerned towards what is happening around him most of the time, in addition to being ultimately distrustful. He is a very powerful and intelligent general, and he has the ego and mannerisms to match his "insane" amount of celestial power and wit. He is very sadistic, unattached, and cruel in front of other Seiryuu warriors (with the exception of Soi), and shows no real concern or attachment for his fellow comrades. Towards his enemies and the Suzaku warriors, he is very sarcastic and tends to tease and criticize Tamahome and his powers a lot.

Nakago is a very mysterious character - the Seiryuu and Suzaku Seven have always agreed upon the fact that no one can really know what he's really thinking. Though Nakago appears dark, sadistic, and emotionless towards people, his tragedic childhood and unhappy teen life explain his being picky about the people he wants to care about - despite there being only a few exceptions (Yui and Soi), when he grows attached to someone, he goes great lengths to protect them. 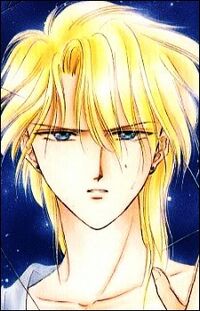 Nakago has stark platinum-blonde hair that slightly goes wayward at the top, the rest reaching down his shoulders as of the present and when he was young. He has "piercing" blue eyes and a perfect pale complexion. Nakago is a strikingly beautiful man with slightly effeminate features when he was younger, causing him to be a frequent target of sexual harassment during his stay in the Kutou.

When he was young, he wears a white shirt under a colored kimono. When he appears in the series, he is wearing a dragon-themed helmet, showing only his eyes. When in the battlefield, he wears a blue cape, armor, and a green dragon claw-shoulder guard, all of these worn over fitted white pants and a loose long-sleeve shirt. Nakago also wears blue gauntlets.

"Priestess of Suzaku...You say your ideals can stop the hatred I have cultivated. Then show me... how you’ll… stop it....""
—Nakago to Miaka

Nakago appears as the strongest of the Seiryuu warriors and is also the unofficial leader. He is very strong, and his strength is more than worlds apart from Tamahome's skills. His powers are commonly wide energy blasts.

He also has the power to knock someone out cleanly using his constellation mark a lifting up his hand. He is also an accomplished sorcerer.

"You must not look into another man's heart.""
—Nakago to Tamahome

Nakago was born in the Hin Tribe and awakened his celestial powers when he was still young. When his mother was being raped by the Kutou soldiers, Nakago blasted them off and killed everyone including his mother. The emperor of Kutou then commanded the guards to stop when he saw the mark. He was sexually abused by the emperor because of his natural beauty and charismatic appearance. He then trained to control his power. He met Soi while he was training, Nakago knocked out a man who was demanding Soi to take her clothes off.

He first appeared when Miaka went to Konan all by herself to find Yui, while Tamahome was following her. Miaka then states to the guards upon entering the country border that she is the priestess of Seiryuu, to enter the country. But Tamahome rushes after her, but he can't enter. So Chichiri appears and takes Tamahome out of the fight and says that he's drunk. Chichiri then freezes the guards and Tamahome is able to enter the country border. Nakago then appears, in armor, and breaks off the spell. He then heads for the Kuto palace. Tamahome holds a grudge against him, and he's obedient to Yui, as the priestess of Seiryuu. He bribed Yui to become the priestess of Seiryuu to grant his wishes. He met Yui in the streets of Kutou when men were attempting to rape Yui. Nakago then saves her and brought her to the Kutou palace.

Then Nakago tells repeatedly to Yui that Miaka left her all alone and betrayed her and all. Yui, alone and confused, then just accept that Miaka left her all alone and all that. But not completely. When Nakago, Yui, and Miaka meet at the hall with the emperor, Nakago does not know who is the real priestess of Seiryuu, so he pulls out the Universe of the Four Gods and read that Yui was the real priestess. He then orders the soldiers and guards to seize Miaka and not to harm Yui. Yui and Miaka then hide inside a dark room and Tamahome manages to break in while Yui was heading to Nakago to get the Universe of the Four Gods. When she returns, she sees Tamahome and Miaka kissing and hears that Miaka came back to the world for Tamahome, not Yui. This hurts Yui and she makes up her mind to be the priestess of Seiryuu, and when Miaka and Tamahome go out of the room, Yui hands over the scroll to Miaka and says that she has something to show to Miaka. They then arrive at the hall of Seiryuu and Miaka then screams when she sees the statue of Seiryuu and Yui says that she's making a fuss over it. When Yui finally realizes about Nakago’s ambition and obsession for revenge and power, she confronts him and questions his motives. What Nakago tells her contradicts what he says to her previously, and makes her shocked and horrified. As Yui witnesses Nakago destroying her world along with Miaka and Tamahome, she tearfully uses her third and final wish to restore Miaka's power of summoning Suzaku, which allows Tamahome to defeat Nakago once and for all. In his dying moments, Nakago confesses that all the deed he's done has been for revenge, which has put him through hell. As he fades away, he sees his mother and Soi one last time.

His spirit resides within his earring, which Yui wears it as a memento and reminder of the mistakes both Nakago and herself have made. During the final battle against Tenkou, Nakago’s spirit shields Yui and her friends from harm, which Yui feels relieved and grateful of him.

At first appearing as a confidant and possible friend to Yui, Nakago ends up taking advantage of Yui's belief she was raped, saving her life but making sure she falls under his influence and although he bides his time for a long while pretending to follow her commands and do her bidding, in reality, he is manipulating her as much as the rest to gain the power and influence he desires to truly wreak vengeance on the world he lives in.

Soi, a fellow warrior, is one of the only characters who really understands Nakago, although she is unable to protect him from himself. She possesses the ability to manipulate chi through intimacy, and for this reason, he takes her as his lover. However, it appears that he has some deeper feelings for her as he is concerned for her health on several occasions, and he carries her body with him after her death.

If there's anything about Nakago to remember, it's that he only associates with people he can use. Tomo, while canonically infatuated with Nakago, is not only his pawn but at times, his adviser. In the manga, Tomo actually suggests that Nakago does not rape Miaka, not because of Suzaku's barrier, but because it's stepping too close to his own childhood experiences. Of course, Nakago doesn't always listen to what Tomo says, but as the object of his love, he finds the best uses for him.

Hang in There Nakago!

Hang in There Nakago! (心宿しっかりしなさい! Nakago Shikkari Shinasai!) is extra short stories in manga and anime. Nakago (role name) is a new face actor playing a villain in the popular drama series "Fushigi Yuugi". Of course, he isn't cold-blooded or schemer either, he's quite insecure when around Tamahome and Miaka, which are his senior actors. He is encouraged by Yui and his fan who gives him a purple rose.

""For me, fighting is proof of living" I mutter, alone. I can't feel "loneliness" because I've never been close to anyone..."
—Nakago in Blue Eyes...Blue

Both Furusawa Tohru and Okiayu Ryotaro lent their voices to Nakago's Vocal Collection, a compilation of songs sung by the cunning warrior for the Fushigi Yuugi Soundtrack in both the anime and drama CD.

Community content is available under CC-BY-SA unless otherwise noted.