Once named Reipin, Neiran is introduced in Fushigi Yuugi Byakko Ibun. She is the child of a Fuuin (A beast that can transform into a human) and a human man named Tohotei, who made his life as an innkeeper in a small Sairou village named Nado. Unaware of her half-fuuin heritage, Reipin lived with her very abusive family: they beat her, overworked her and didn't feed her adequately. It's also implied that she suffered sexual abuse at the hands of her older half-brother.

One day, a man named Nirusha came into the village. He fought a renfuu (a human that has been transformed into a beast) and, with Reipin's help, subdued and killed him, though at the cost of his ear. The renfuu turned out to be Reipin's abusive brother, and from then on Reipin tried to bond with Nirusha since he was the first non-villager that she ever met AND the first person who didn't despise her.

After lots of efforts (including bringing him his severed ear), Reipin earned Nirusha's trust and friendship. In exchange for her gentleness he gave her new clothes and a protective talisman, plus he also told her about his origins. He turned out to be a traveling sorcerer who needed to kill tigers to escape a cruel curse that had killed his family; trying to return his kindness to her, Reipin (whom he had renamed Neiran) attempted to help him. However, the tiger she hunted down turned out to be her mother, who had come to check on her well-being and rescue her from her horrible life.

A terrified Neiran went back home, demanding answers from her father. When Tohotei explained to her what her origins were, the shock and horror that Neiran felt upon fully realizing what she had done to her mother to help Nirusha caused her to lose control... and, for the first time, she took her tiger form. She murdered her abusive family, destroyed the Nado village and killed all the inhabitants; then, still in tiger shape, she begged a shellshocked Nirusha to kill her and use her bones to save himself, saying that she has been so thoroughly defiled all of her life that didn't want to live anymore. Nirusha recovered from the shock, however, and not only refused to kill her but told her that she was human, managing to calm her down and return her to her human form.

After all of this, Neiran said goodbye to Nirusha and decided to leave the destroyed village, setting out on her own journey.

Neiran reappears in Fushigi Yuugi: Byakko Senki, now as a young woman in her late teens. She has been captured by a caravan in her tiger form, but when the caravan is destroyed by bandits, she escapes and kills the bandits to free herself. Incidentally, she also saves a very young Suzuno Osugi who had just arrived to Sairou and was about to be kidnapped by the same bandits; soon, both girls are taken in by Kasaru Raotsue and his younger brother Karumu.

Due to her terrible hardships and being separated from Nirusha, the first person who was kind to her, Neiran has grown into a very bitter, cynical and emotionally wounded girl. She hates the world and people who either have had easier lives or show her compassion, since that reminds her of her cruel life where she had next to nothing. At some point tries to seduce Kasaru, but not only he refuses but he tells her that he feels sorry for her and the souls of the people she has killed; this almost makes her attack him in her tiger form, but Kasaru neutralizes her attack with talismans. She retakes her human form and scoffs at him, but does tell him that the talismans reminded her of "the only one who understood me".

After learning from Kasaru that Suzuno is almost surely the Priestess of Byakko, both girls are separated from Kasaru and Karumu. Still reeling from her talk with Kasaru and realizing how sheltered and happy Suzuno had been until her arrival to Sairou, the traumatized Neiran eventually grows so angry that she seriously ponders killing Suzuno due to envy. When she verbally attacks Suzuno and then grabs her, Suzuno's Priestess powers activate and she's suddenly sent back to Tokyo, leaving Neiran alone. As the energy released in such an incident draws Sairou soldiers to her, she decides to usurp Suzuno's place as the Priestess (using the kimono that belonged to Suzuno's mother Tamayo as a proof, since she had been wearing it after her clothes were stolen), considering this as her chance to finally have the dignified life that had been denied to her.

Neiran reappears in chapter 5 of the manga, when Suzuno is sent back to the Universe of the Four Gods. Suzuno resurfaces agan in a huge bath inside the Sairou Royal Palace, right when Neiran is being bathed by some shrine maidens known as the Hoshiyomiko before she reunites with Emperor Nahido. Neiran soon recognizes Suzuno as the rightful Priestess who has returned, and could potentially blow her deception. As Suzuno escapes, Neiran says that she is an assassin sent to kill her and soon the Royal Guards are searching for her, but she's found first by Tokaki.

As the daughter of a fuuin (a beast that can take up human form with the help of a specific amulet), Neiran has the ability of transforming herself into a tiger. In this form she has above average strength, reflexes and speed, letting her fight off attackers with less effort than as a human. She can be affected by magic, however, especially talismans that have been specifically developed to seal a fuuin's powers.

Even without transforming, Neiran is noticeably athletic and a strong hand-to-hand fighter capable of wrestling with huge animals and using bows/arrows to hunt them down. Additionally, she has always had acute senses: her sense of smell was strong and accurate enough to find different herbs without any hassle and easily track down people whose scent she had smelled before. 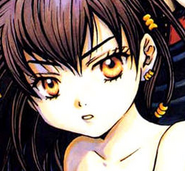 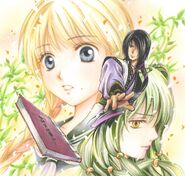 Neiran with Suzuno and Tatara 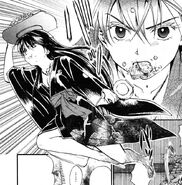