"I was wondering what this priestess would look like. But she’s still a child."
—Nuriko 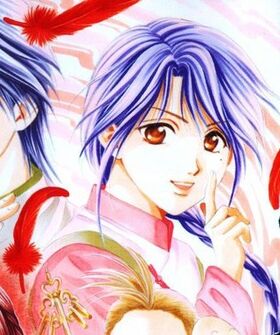 Nuriko is one of the Suzaku Celestial warriors in Suzaku Ibun, and one of the players whom Madoka can choose to end up with. If Madoka chooses Nuriko, she has the option of reincarnating him in her world or living with him in the Universe of the Four Gods, where she will work in his family's cloth shop and marry him many years later. Like most of the characters, he is a returning persona from the original Fushigi Yugi.

"I was slow to say it. I’m Kourin. --My Celestial name is Nuriko."
—Suzaku Ibun

While continuing her search for the Suzaku Celestial warriors, Madoka overhears two girl from Hotohori's Inner court speaking and enjoying themselves. After being persuaded by Tamahome and Hotohori to join in on the girl's teaparty, the young priestess heads off to introduce herself to the girls present at the tea party. While the first two maidens are pleased to meet Madoka and consider her to be very special, Korin makes her appearence and states that the priestess is "nothing special" and that "she is still a child". She then becomes angry at her when he discovers that Madoka is allowed to call Hotohori by his name, without having to add the honorific of "-Sama", thus implying that both him and the priestess are close, making Korin very

jealous indeed. However before she can have a go at Madoka, one of the palace soldiers, who was attacked by Tamahome when he and Madoka were searching for the Celestial warrior inside the palace, appears again and tries to attack the priestess. Whilst escaping, one of the girls from the harem falls and begs Madoka to help her out, something she tries to do, but fails to do so. When it looks like Madoka is about to suffer a direct hit by the soldiers sword, Korin catches the blade with her hand and knocks the soldier out cold with a single punch. After the entire ordeal is over, Madoka notices a symbol on Korin's chest, when she asks her if she's a Suzaku warrior Korin introduces herself as Nuriko and states that she now has a better opinion of Madoka after she has protected her friends. When Madoka then asks Nuriko to join her on her search for the rest of the Suzaku Warriors, he doesn't seem too sure about going along (though Madoka notices that his face says something else implying that he really wants to leave), but after hearing that Hotohori's travelling along as well, he decides to join since it seems like a perfect opportunity to be close to the emperor.

"I have the body of a man and the soul of a woman! I won’t let anyone complain about it! I am the very mirror-image of a maiden! That is who I, Lady Nuriko, truly am!"
—Nuriko to Madoka

While journying to find the other warriors, Nuriko notices in one point that Madoka doesn't look very good, he thinks that she has fallen ill due to travel fatigue and suggests that they all stop to take a break near two springs, where they can all wash and relax. The boys head of in the direction of one spring but Nuriko and Madoka head off in the other, Madoka, still unaware of Nuriko's "secret" asks him if he could turn around while she's getting undressed since she's rather shy of her body. Nuriko playfully tells her that she has nothing to worry about and is about to reveal his true identity, but he stops himself and says that he understands her and asks her to turn around and close her eyes for him as well while he's getting undressed. Madoka does so, but she hears him get in quickly and swim away before she manages to get in.

After swimming around for a while, Madoka notices another figure in the lake. She feels at ease because she knows it's Nuriko and she decides to swim closer to "surprise her", but when she gets closer and calls out to her warrior, she is greeted with a surprise: Nuriko is a man. Although Madoka is inicially surprised about it, Nuriko explains to her that although he has the body of a man, his heart and soul are those of a woman and he he prefers to be thought of as such and Madoka ends up accepting his point of view. He then tells her not to stress herself too much over Misaki because if she does, things wouldn't go as smoothly for her. After Nuriko leaves the lake, Madoka actually feels happy that she got to know him a little better.

When everyone has finished bathing, Nuriko reveals to the other warriors that he is actually a man, surprising especially Tamahome and Hotohori (though the latter seems more surprised that there is actually a man as beautiful as him).

When they first meet, Nuriko feels jealous of Madoka for how close she seems to be with the emperor. However once the journey begins Nuriko starts to act as an elder sister to the young girl, even calling himself "big sister Nuriko". He playfully teases her at times but he also acts serious when comforting Madoka or giving her advice. As the story progresses onto the journey for the Shinzaho's, Nuriko starts to slowly drop the "big sister" act and starts to show a more romantic side towards the young priestess. Near the end of the game before the war with Kutou/ second summoning ceremony, Nuriko finally manages to confess his feelings to Madoka which she reciprocates as well.

Nuriko conforting Madoka the night before the summoning ceremony

Nuriko and Madoka together in the Universe of the Four Gods