Seiji first appeared in the third chapter of Byakko Senki, when he was 11-12 years old. Having lost his family in the Great Kanto Earthquake , he was found and sheltered by Dr. Oikawa and the two teamed up to rescue younger children from being taken in by criminals. In his rounds he found Suzuno, who had just returned from the Universe of the Four Gods and was being harassed by child slavers; he quickly told them that he had called the police and they were on their way, getting them to run away. Then Oikawa arrived and recognized Suzuno as the daughter of his acquintance Takao Osugi, taking her and Seiji in (plus other two young boys, Hidero and Kenichi).

In the 10 following years, Seiji not only grows into a handsome young man, but as the eldest of Oikawa's adoptive children, he takes very heavy responsibilities onto himself. He decides to go to the Imperial Japanese Army Academy (Rikugun Shikan Gakkou), to pursue a military career for two reasons: to help Oikawa support their adoptive family, and to make research about the Universe of the Four Gods (back then there was heavy censorship in Japan about anything regarding the Japanese occupation of East Asia: this includes China, the country where Einosuke Okuda found and translated the book itself). He also has developed romantic feelings for Suzuno, feeling jealous when he sees the portrait of an unknown young man in between her sketches and telling her to not see him just as a brother.

Around the time when Suzuno properly recovers her memories about her past incursion in the world of the book and learns what happened to the Okuda family, Seiji suffers a serious accident during training and breaks his leg. The injury is very severe and it puts his whole career in risk, though Oikawa believes that he will recover well. Seiji falls into depression and, as Suzuno attempts to comfort him, he cannot hold back any longer and tells Suzuno that he's always been romantically drawn to her, and wants her to be his wife.

As Suzuno tries to "digest" this new information, she realizes that they're close enough to share a kiss and gets so scared that she runs off, much to Seiji's dismay. When she calms down, Oikawa talks to her and asks her to consider accepting Seiji's marriage proposal. But when she's leaning towards actually taking it and marrying Seiji, the Universe of the Four Gods appears in front of her.

The book's magic deactivates, however, and Suzuno takes it home. She then decides to accept Seiji's proposal, in an attempt to cherish the life she already has and keep him from returning to the Academy and die fighting in Manchuria (which had been seized and turned into the puppet state of Manchukuo by the Empire of Japan the year before). Seiji is overjoyed, logically, and plans on making Suzuno as happy as possible in return. However, few after they get engaged, Suzuno is attacked by Seiji's jealous classmates and then taken inside the Universe of the Four Gods again, right in front of him and Oikawa... 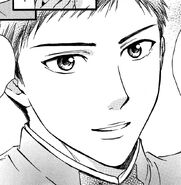 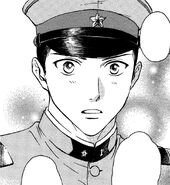