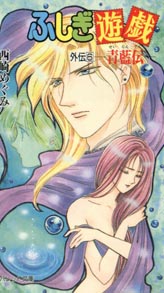 Seiran Den (The Indigo Legend) is Nakago's story. This light novel follows Nakago's tragic past to his rise in the Kutou army and his identity as a Celestial Warrior of Seiryuu. It also touches on Tenkou's influence.

Abused roundly by both his own people, the Hin Tribe, and the Kutou soldiers who assaulted his mother, Nakago has to live with the fact his uncontrolled power and it's implications brought about the death of not only the woman he loved most but also, at a later point, his best friend who, in a happier lifetime, he might have married.

At this point, his soul seems to have died inside him because he can't even bring himself to kill himself, as if punishing himself for what he's done by making his life continue. His drive is revenge and hate from the heroine, and he seems to feel no emotion towards anyone or anything, enduring sexual abuse at the hands of the Kutou emperor and sacrificing anyone who gets in his way.

He dreams of destroying Kutou and bringing the whole kingdom to its knees for the crimes committed against him and his family, his main comfort seems to be his faith in the evil demon god Tenkou. Even his own father is more than a little afraid of him. Despite his freezing over of emotion, Nakago's saving of Soi as a young man does indicate that he hasn't completely lost his heart and soul - as if he sees in her at that moment his mother or his friend being abused by the Kutou guards. Soi's portrayal in this story is strong as well, and a much clearer picture of her as the desperate prostitute trying to work out of her situation and escape the drudgery and pain of her life as such.