"That's not true! Because I won't let Genbu be summoned!"
—Shigi

Shigi (Shigi) is a major character in Fushigi Yuugi Genbu Kaiden and one of the playable characters in Kagami no Miko. He is a commander/captain in the Kutou Special Taskforce, loyal to Prince Hakei; he and his direct subordinate Hien are bent on killing the Genbu Warriors and their Priestess, Takiko Okuda. He is first assumed as a girl because of his feminine speech patterns an androgynous appearance, as he was castrated at the age of 12. Shigi rather does not have a good relationship with Hien. He is a Capricorn, born on the 23rd of December.

In the Viz North American release, Shigi's name was respectively changed into Ziyi.

Shigi is a pale and feeble 16 or 15 year-old with an ultimately androgynous face. His facial features consist of white-blonde chin-length hair [ which is actually longer than Takiko's, it isn't just that visible because he ties it behind ] and big purplish-blue eyes below extremely thin eyebrows, which give him a more feminine look. In Kagami no Miko, he is given a more masculine appearance. Shigi's hair becomes golden brown and his eyes become blue respectively. His hair is also cut shorter.

In the prequel he is seen wearing a purple scarf and a long-sleeved shirt with chest buckles and normal army outfit below similar to his partner, Hien. However, in Kagami no Miko, his outfit is toned down to a more simpler one: the purple scarf is still there, he wears a free-flowing white body suit respectively under armor plates. Shigi is always seen licking his bamboo sword, which is strapped in a belt astride his waist or his back. 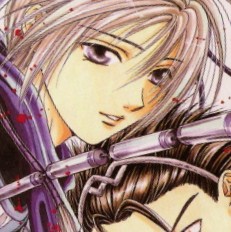 In stark contrast to Hien, Shigi is a very calm boy, even in the most desperate of situations; implying a very psychologically harmed brain. In fact, he is a ruthless killer who smiles while killing people and is delighted while inflicting pain to those who are enemies of Prince Hakei. The brain of the combination, Shigi commands the special taskforce. Most of the time, he acts on impulse but there are also a lot of times when he plans. As much as he is ruthless, he is very loyal to Hakei.

The most striking characteristics are that he's quite effeminate. Shigi is the type of person who appears to be cool and calm, but in reality, he is very psychotically blood thirsty, killing anyone and anything between him and victory. His expressions nor his temper do not clearly disclose his true intentions as much as his actions. Apart from this, Shigi is also a very conceited boy, and seems to be very proud of himself.

However, in Genbu Kaiden 's PS2 game Kagami no Miko, Shigi is even more soft and merciful, as to give contrast to his personality in the prequel. He becomes attached to Mariko despite their initial antagonistic relationship. Shigi questions her attachment and loyalty and willingness to stay with the enemy a lot; and he is forced to strain the relationship because of the climax that they will get and because of the truth that they are enemies. Yet not a day has passed by that he doesn't regret meeting Mariko: this is what he feels like at first. Shigi somehow feels guilty for doing all the things he had done to Mariko (such as when he took her hostage and when the army captured her) and soon he realizes his feelings for her. He appreciates her a lot and is very thankful for the fact that his enemy stayed with him and went as far as curing his fever. When the period of the 10 days end, Shigi is left heart-broken and keeps asking himself why he didn't "love" Mariko better.

His father being part of a rebel group, they were attacked, robbed, and killed; but Shigi was left alive. He was castrated morbidly [ it was in this time he became a eunuch ] and was meant for work in a harem. Shigi notably said that he only had animal bones to keep himself alive while he told his story to Hien. After some days Hakei finds him, saves him, cares for him, and appoints him to be a captain in the army. This is where he meets Hien.

"So this is the priestess? You look just like us!"
—Shigi, about Takiko

Shigi is introduced to Taki along with Hien immediately after Taki joins the taskforce out of boredom. In the prequel he is always seen along with Hien, fighting alongside him. When they are not fighting they are often seen together in their tent. Shigi makes his appearance to Takiko and Tomite when Darute's father sells out their location, and claims that Takiko looks just like them. Many common scenes fighting with Takiko's group are repeated, the most when Shigi chains Takiko with his sword though she always escapes. Shigi also appears in Ifurei Province asking an audience of Anlu, and causes her to lose her powers after lying. After these Shigi and Hien appear next in the village of Maguma, another one which they destroy. In the future chapters he appears with the taskforce in

close pursuit with Takiko's group. Finally when Takiko is captured along with Soruen, Shigi takes the two to the taskforce and much to Hien's surprise, later takes a bath in a nearby chilly river. Shigi also appears in the ice age, clad in winter armor.

When the Genbu Warriors manage to slip into Hokkan palace's underground, Shigi and Hien follow them together. They fight a heated and intense battle until the Genbu warriors stop. Hien tries to talk Shigi into escaping, saying that the warriors are too strong and that their "chances are slim". Disappointed at his partner's disloyalty for Prince Hakei, Shigi cuts him down with contempt.

Shigi appears in Kagami no Miko during Day 5, with Shura replacing his partner, Hien. He is one of the primary antagonists but as the game progresses on, the player may choose him to end up with Mariko. Shigi is the most powerful playable character, next to Hikitsu. Replacing Hagas and Teg, he is the 7th Genbu warrior.

Shigi is not a warrior to be underestimated, at any time; Prince Hakei caught hold of the young boy's talent and made it well that he will be given proper education. He is agile, nimble, and strong; using unusual techniques with his bamboo sword. [ It has been implied that all of the above were the reasons that Shigi was the most powerful playable later on in the otome game. ] To add, he is very violent if not impulsive; but he is not a very great tactician. 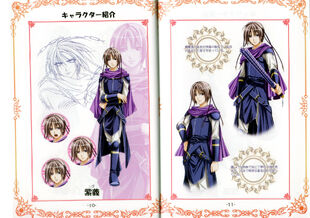 Shigi in the game manual. 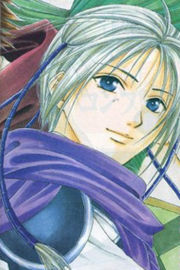 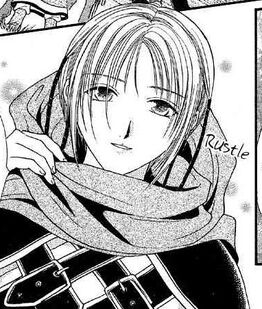