"A person is weak when he or she is alone. But when individuals come into groups, they grow stronger. Abuse those who are weak."
—Ren

Ren Shigyou, also known as Renhou, is a character from the Second OVA. He also competed with Yui on the student council in Yotsubadai, for President. Ren is one of the Four demon gods. As a demon god, he has the ability of controlling people. He is the younger brother of Kashimiro Miiru . Although he is a demon god, it is revealed that he is the human form of Tenkou. He considers Miaka as his enemy. He is very popular at school and is in the same grade as Miaka and Yui is. He is also a freshman and becomes the leader of the group of students who threathen Taka and Miaka.

As Miiru's brother, he bears a striking resemblance to her. His looks attracts many girls in school: amethyst eyes, pale purple hair, and fair-skin color. His hair color is also similar to his sister . He usually wears the Yotsubadai uniform. He is jealous of the fact of the miracle that allowed Taka and Miaka together. He has a bit of a broad build.

As a younger brother, he depends on Miiru, and comes along in school mysteriously.

Ren is very popular. Not just among the girls, it seems to extend to everyone regardless of gender and is very kind to others. Yet he is the human form of Tenkou, he is not that evil and mischievous as Tenkou is. He has a fresh personality and speaks only when needed. He shows up mysteriously and is be-known to many people. He has a reputation for his looks. As referred by Nayomi, Miaka's schoolmate, he is a very "nice" guy.

In manga and anime, Tenkou revealed that Ren and her older sister, Miiru has an incestuous relationship. It's the reason why Ren is envious with the miracle happened to Miaka and Tamahome's love story. Defying the boundary of 2 different worlds when Tamahome gave up his past memories in order to be reborn in Miaka's world as Taka Sukunami.

"Wait. It's not right to disqualify a candidate just because he or she appeared late."
—Ren

Ren first appears in the first episode of the 2nd OVA, he says "hi" to Miaka and makes Yui jealous. His reputation in school becomes famous especially among the girls. Ren appears next at the Student Council day, when Yui did not appear and the judges ask if they should disqualify her. Ren says "It's not right to disqualify a candidate just because she appeared late. He makes his speech and saying that teachers are wrong and students should be given their own way (much to the teachers' surprise). Ren controls Miaka's schoolmates, and makes Yui vice-president. Although they discuss this at a room and the discussion was not very long, Ren offers to walk Yui home since it's getting dark. Yui just replies with a plain, angry "goodbye." As Yui was going down the stairs, the glass window shatters and she gets minor scrapes and cuts. Ren walks down the stairs and warns Yui to be careful because "they" do not want her to be devoured by an azure dragon again. Yui, bewildered, shocked, and confused about this, asks him who he is, and Ren says that Miaka is her enemy. He walks away. Then he is seen again when Miaka sees the writing on the blackboard, "Miaka Yuuki must die" Her schoolmates then bring her to Ren, and Ren talks about how they will jump her off the roof and how the public will have fun explaining it. She is saved by Taka, and Ren is suddenly wrapped with the scroll form of The Universe of the Four gods and is injured, and he disappears. After Miiru bites Taka's ear, Ren is held by Miiru , injured, saying that it will almost be over for Taka, and Tenkou appears, saying that Miiru should take her time. After Miiru and Ren unfortunately die, he and his beloved sister is revived and turned back to normal in the last episode of the 2nd OVA since Tenkou's spell is now broken.

Ren's name is also suspected to be "Ren Kashimiro" since Miiru is his sister, but this was never mentioned, explained, or specified. 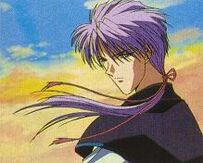 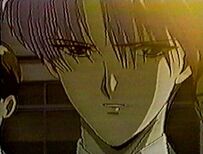 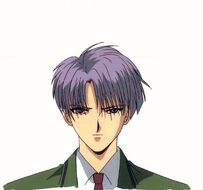 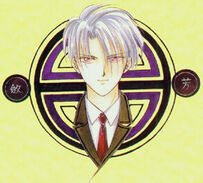 Ren may be the mistranslation of "Len".