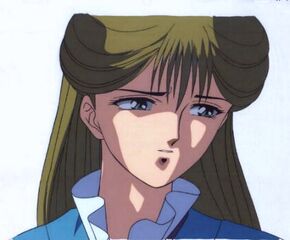 "Please… tell me why you never came back. I believed in you and waited for you. I tried my best to overcome the extreme pain…"
—Shoka

Shoka is a daughter of a local nobleman whomMitsukake fell in love with. Though they were not married, the two of them had a very close relationship.

She looks naturally beautiful, has olive hair, and wears a blue kimono. Shoka is not that talkative, and she is extremely kind to others.

She first appears when Miaka, Hotohori , Nuriko, and the newly-joined Tasuki were searching for the Suzaku warriors, they had seen a character in the mirror which Taiitsukun gave them to help them search. They see a woman, and Miaka starts to take off her clothes, and Shoka, bewildered, does not know much of the thought. Miaka apologizes, saying that she needed to see if she had marks on her body. They accompanied her to a house with a dead man, and Shoka suddenly went near him, sort of whispered in his ear, then he was alive. They then see a man holding a fish, and Miaka tries to chase him; but, he went inside his house.

Miaka then starts to weaken, and they realize that she has caught the illness. They then ask the man who got the fish, who was a doctor, to cure Miaka. He refuses. Unable to persuade the doctor, they go to Shoka's house, and they watch Miaka as she suffers the illness. Unable to bear watching it, Hotohori asks Shoka if there's a way to stop it. Shoka said that there is, to kill Miaka, and she will resurrect her later on, so she can restore her full health.

Hotohori then agrees and asks everyone to step out of the room. Hotohori then prepares, but he stabs the bed instead. Hotohori declares that he can't kill Miaka. So "wait here, and I'll call for that doctor again." Miaka then agrees, and Shoka and Miaka were left alone.

While Miaka was sleeping, Shoka held out a knife, and said that was her turn to kill her, and stabs, but Miaka evades, although asleep. Shoka repeats this several times, but Miaka evades in several other ways. Then, Shoka wondered if Miaka was really asleep, or not.

Miaka then starts to talk, "Ms. Shoka, I may be blind, weak, or anything, I kept this promise to Hotohori. I came here to find someone I loved for a long time and someone who I want to be with all my life."


Shoka then starts to walk away, and Miaka starts to follow her, although blind. Shoka tells her to stay away, and a demon started to burst out. Back in the house of Myo Juan, the doctor, Hotohori kneeled and asked him to heal Miaka, because Shoka's power may not be enough. Tasuki and Nuriko did the same. Myo Juan surprisingly said that Shoka died a year ago. The trio then heads off for Shoka's house but are ambushed by zombies. Tasuki then tells Nuriko, and Hotohori to go on, and he will hold them off.
When they returned, they saw a demon bursting out of Shoka, tangling Miaka. Trying to save her, they also get tangled. Meanwhile, a black-haired man enters, telling Shoka to stop, but Shoka tells him to use his "Great Healing Power" to kill off the demon forever. Hotohori, Nuriko, and Tasuki soon realize that he was the doctor, with his haircut. Shoka and Mitsukake then reveal their story, and Mitsukake uses his great healing power, and kills off the demon, killing Shoka. Then he healed Miaka, and as soon as Miaka saw his Suzaku mark, she was well again.

She also made an appearance in the 2nd OVA. She was a little young when she saw Mitsukake as a soul.

Then in the 3rd OVA, (Eikoden) a younger version of Shoka appears when Taka falls down and collapses, they see a younger version of Shoka carrying water, and she gives it to Taka. She says that there's still some fresh water nearby at her village. As a constellation shines and appears on the mirror, they follow her, and the reincarnation of Mitsukake, Chosei, protects her, and cries, unable to state what he will do if Shoka is hurt by the warriors. While Chichiri, Tamahome, and Tasuki were looking for the warriors, they saw a young

Mitsukake, unwanting to leave because he wants to be with Shoka, but Shoka said that it's better to go with the warriors, so he went.

Shoka watches the reborn Myo Juan go with the warriors until he is out of sight, but a fake beast god attacks her. Chosei rushes after her. Suddenly, Chosei holds out his hand, and the bubbles appear. And, they soon figure out that it was Mitsukake, helping the young version of him heal Shoka.

"But I believed in him and waited for him. Because… Because I loved him…"
—Shoka, in the light novel Oumei Den

In the light novel Oumei Den, Shouka, and her cat, Rin, encounter Mitsukake. Shouka is very determined, strong, and forward in her desire to know the gentle giant better, whereas Mitsukake is a lot more uncertain and unsure. Mitsukake is taken into the house of his father's rival, befriending the man's son Kyuushin, and eventually proving to the rival doctor that the true strength of a physician is more than just high prices and medicine.

Although there is a misunderstanding between Kyuushin and Mitsukake over Shouka, it's Kyuushin who brings Mitsukake back into Shouka's life; and, by the time of her death, they are engaged to be married. However, a sickness demon is lurking, hoping to break down the souls of the people, and his target is Shouka, preying on her doubt of Mitsukake, and taking her down to her grave while luring the gentle young doctor away from their village.

Mitsukake's hermit lifestyle is not the first time he adopts this way of living away from the world, either - he also becomes a hermit after his original fight with Kyuushin when he believes that people hate him and that he should stay away after he used his power to drive a demon from Kyuushin's body -- saving his friend's life, but appearing to have wounded him in the process. Kyuushin survives the story, and mention is made of him and his father visiting the graves of Kaku Shoka and Myo Juan after the deaths of both.