Fushigi Yuugi Wiki
Register
Don't have an account?
Sign In
Advertisement
in: Characters, Celestial Warriors of Byakko, Female,
and 4 more

"Hey! No one said anything about tits or boobs here!"
—Subaru to Tokaki about his lecherous attitude

She is married to the flirtatious Byakko warrior, Tokaki. Sweet and nurturing, Subaru tends to the exhausted Suzaku Warriors that descend upon her home. Though she is often exasperated by Tokaki's roving eye, she loves her husband and they're a very effective battle couple. Unlike Tokaki, she feels that Miaka and Tamahome should enjoy what happiness they have, though she does agree with telling the pair that they could never have a happy ending.

Subaru's Seishi power has to do with time manipulation, and especially time reversal. It can be used in very versatile manners:

- She can briefly use her magic to revert herself AND Tokaki to their younger selves, so they can fight the Seiryuu Senshi more easily. Its drawback is that the spell puts quite the strain in their bodies, causing them near impossible to heal internal injuries.

-She can place a similar spell on someone to stop them from aging like she did to Tatara. The con is that the enchanted person will have to remain in the area where the spell was cast, lest they will begin aging rapidly if they leave. Tatara was fine with it because it lets him guard Suzuno's Shinzaho better.

-She can revert things to their former state, which she uses to restore Miaka's voice after she's rendered mute by Miboshi's magic. 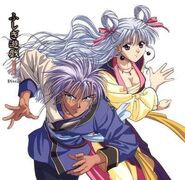