Suzaku Ibun (Sujaku Ibun) original title Fushigi Yûgi: Suzaku Ibun (ふしぎ遊戯 朱雀異聞) is a simulation game for the series, its story based on the original Fushigi Yugi. The game, though having most of the characters as returning personas from the original series, it has apparently replaced Miaka and Yui. It was released in 2008, in two editions: limited and full edition.

The game is set up similar to the Fushigi Yuugi Genbu Kaiden Game. With the difference that this time you can also choose between two characters to play with you. Once with the Suzaku warriors along Madoka Ootori of and on the other side of the Seiryuu warriors with Misaki Himuro, it is very much like a typical otome game/dating sim.

Whether it is in controversy or not, it is highly apparent that the goal of Suzaku Ibun was to replace the two heroines (Miaka and Yui) and make two new ones in their place and to be able to alter their futures.

The character menu displays the 7 warriors portraits and their expressions will change everytime Madoka makes a choice. For every choice made, a certain character's bar will go up one point (except for Chiriko's which will go up two or three points since he appears late in the game), and their expressions, as well as the background of the portrait, will change. This will trigger certain scenes along the way depending on who has the most points.

It is mainly a dating simulation game. The plot is simply the recreation of the original Fushigi Yuugi series, but the game allows you to avoid character deaths if you make the right choice. Madoka Ootori falls into the hands of The Universe of the Four Gods along with her friend Masaki Himuro, same as how Miaka and Yui entered. While Himuro goes missing, Madoka is fortunate enough and ends up in the emperor's palace, safe. The story of the series continues throughout, following the milestones unless the player chooses different options. Unlike the Manga/Anime series, you can choose who you end up with. Some scenes that are not in the original Anime/Manga series may be triggered if you do certain arrangements; like how the player can prevent Nuriko and Chiriko from dying, like how the player can prevent Amiboshi from falling off the river.

There are five different types of endings for each of the seven warriors plus one ending with Misaki, which would be known as the friendship ending (Misaki must have the most points to obtain this ending). The rest of the endings are the following:

As usual, no characters from the original series have been omitted (with the exception of the Genbu warriors who've appeared in Kagami no Miko). Since the Suzaku Seven are mainly on this game they also have come to meet their nemesis, the Seiryuu Seven, on equal grounds.

Miaka and Yui have been replaced with brand new characters named Madoka Ootori and Misaki Himuro. Allegedly this is because, since Miaka and Tamahome's love story is so integral to the manga / anime plots, making her the lead of a dating sim where the protagonist can fall for other men would be troublesome for the writers. The problem was solved via replacing Miaka with Madoka, who possesses similar character traits but does not have such a plot baggage. And since Yui's own story role is deeply tied to Miaka's, she was replaced by the rather similar Misaki. 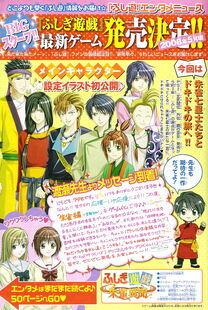 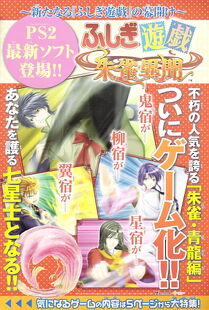