"Tatara, we will always be together, always..."
—Suzuno to Tatara

Suzuno Osugi (大杉 鈴乃 Ōsugi Suzuno) is first introduced in the original Fushigi Yūgi; she is later revealed to be the Priestess of Byakko. Suzuno is the second priestess in the history of The Universe of the Four Gods. She also makes an appearance in Fushigi Yuugi Genbu Kaiden as well as its sequels, Fushigi Yuugi Byakko Senki and Fushigi Yûgi.

Suzuno "Suzu" Osugi is the daughter of Takao Osugi, the assistant researcher of Takiko Okuda's father, Einosuke, who is the translator of Universe of the Four Gods. She considered Einosuke as her honorary uncle and Takiko as a big sister figure.

Suzuno is first seen in a photograph that Takao shows to Takiko, who happily coos over how cute she looks now. Midway through the series, Takao must return home since Suzuno is down with a huge fever; she briefly appears sometime later, asking Takao when will Takiko visit her.

Suzuno only shows up at the very end of this one-shot prequel to Byakko Senki, which is dedicated to the story of Neiran and Nirusha. She's seen as a teenager, praying: a note says that herself, Neiran and Nirusha's paths will not cross for "a little while".

The story takes place in 1923, three months after Genbu Kaiden ended with Takiko's father committing suicide on Genbu Mountain. The earthquake takes place on September 1st in the story, at 11:58 a.m. on Saturday. The manga shows that it's raining on that very day when it occurs, when Suzuno is sucked into the book, both her mother and father meeting their end as the house collapses from the earthquake.

Suzuno was born in 1915, but sadly, there is no specific month mentioned during her birth.

In 1923, during the Great Kanto Earthquake, Suzuno is pulled into the book; at that time, she is only eight years old.

In 1933, when she is eighteen years old, she is once again pulled through the book, and this is the beginning of her adventure.

Fushigi Yuugi: Summary of the beginning

After the deaths of the Okudas when Suzuno was just eight years old, her father Takao was entrusted with the book. Suzuno was deemed too young to understand the complicated circumstances behind it and was only told that Takiko had gone far away to marry the man she loved (which is technically true, as she did marry her lover Uruki before summoning Genbu and dying).

Suzuno managed to obtain the book despite the precautions her father had taken to prevent it from causing similar tragedy to what happened to the Okuda family. She entered the book realm for the first time when she was still eight years old, right after the Great Kanto Earthquake of 1923. Her parents Tamayo and Takao were among the victims of the quake, but before dying Takao managed to send her to Sairou for her own protection: she met people like her future Celestial Warrior Tatara, his brother, and Neiran there. After a short while, however, Suzuno was sent back to the now destroyed Tokyo; Dr. Oikawa and an older boy named Seiji Horie saved her from child traffickers and took her in.

Ten years later, Suzuno was about to finish high school and go to college. She and Seiji, plus two younger boys named Kenichi and Hidero, were adopted by Oikawa during the time skip. A promising and skilled painter, Suzuno was plagued by nightmares and vague memories of her "time" in the Universe of the Four Gods, in addition to serious doubts about her future: while Seiji had entered the military, Kenichi had decided to become a chef and Hidero had already begun to help Oikawa in the clinic, she felt that she was two steps behind her adoptive brothers despite her talent at painting.

Suzuno caught a glimpse of the Universe of the Four Gods book in her school's library, then made research about its translator Einosuke Okuda and found out about his and Takiko's deaths. At that time she fully recovered her memories about the book, remembered more about her former life and her bond with Takiko, and told her adoptive father Oikawa what she knew. Oikawa, understandably terrified for Suzuno's safety, told her not to get near the book, otherwise she would die like Takiko did.

Around the same time, Seiji suffered a serious accident that put his promising military career in risk. He then confessed to Suzuno that he had always been in love with her and proposed to her. Torn between the idea of their childhood friendship and his intense feelings, Suzuno seriously considered accepting Seiji's marriage proposal, but then she went to the school library to try finding the answers she needed and found the Universe in front of her. She took the book home and accepted to marry Seiji, but few weeks afterwards the Universe's magic reacted and took her back inside its pages, right as some of Seiji's companions were about to attack her out of envy against him.

Suzuno then became the second priestess of the book, the Priestess of Byakko, and she managed to: gather the Byakko no Senshi (starting with Tokaki), confront a false Priestess who had taken her place, summon the God without being devoured by him, and bring prosperity to Byakko's land of Sairou. However, she fell in love with Tatara, and they were unfortunately parted when Suzuno was forced to exit the world. When Byakko was summoned, she wished for both of them to be together; but Byakko said that he was unable to grant the wish, since a Priestess' purpose is solely to summon the God and if she lives through, she will be unable to stay in the land she blesses. Suzuno returned to her own world with a sad and heavy heart, though determined to keep on living.

After her adventures in the Book Suzuno lived in the city of Morioka, leading a quiet life with a normal family and taking care of a traditional home, but never forgetting about Tatara and her Byakko friends. How her story ends depends on which FY media is being talked about.

In the manga, Keisuke manages to locate Suzuno in Morioka and speaks to her before she dies of old age. All of this happens off-page, and he mentions the results of his research and their talk to Miaka after Tatara's death in battle.

The anime expands on such matters, showing more of Keisuke and his best friend Tetsuya Kajiwara's quest to find info about Takiko Okuda's death and Suzuno's life. They later go to Morioka and, in the middle of their search, they find Suzuno's grandson Toki Osugi, who's dividing his time between his work and taking care of her aged, dying self. He takes them to Suzuno's presence and Keisuke reads to her about Tatara's "swan song" and death. Suzuno dies in Japan at the same moment as Tatara does in the book itself, and soon her spirit is last seen disappearing with Tatara's, finally reunited after 60 years (for her) and 90 years (for him).

Suzuno is a small girl who has long dark blonde hair, pulled into two braids and tied with ribbons. Her bangs slightly cover her eyebrows. Her eyes are a greyish color and she has a beauty mark on the left side of her mouth. According to Byakko Senki, she uses optic glasses. She's said to be cute yet plain, looks-wise.

Suzuno wears her high school uniform from Japan, which is dark blue with a red (original FY series) or white (Byakko Ibun/Senki) scarf that goes below the collar. Her skirt is pleated and long, reaching below the knee. She also wears black tights and black loafer shoes with it. When not in her sailor uniform, she's seen wearing kimonos. 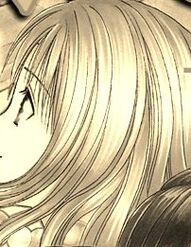 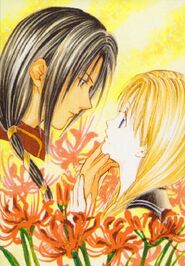 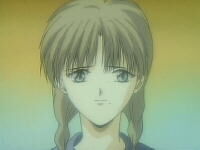 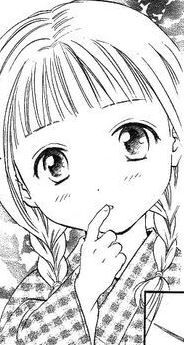 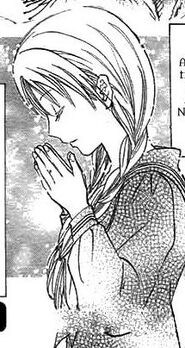 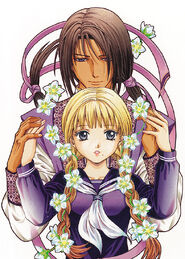 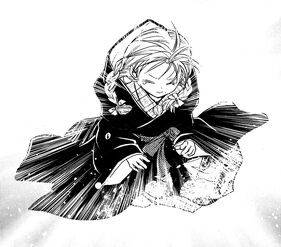 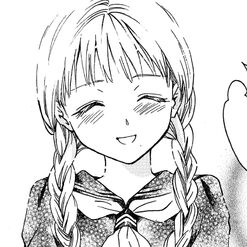 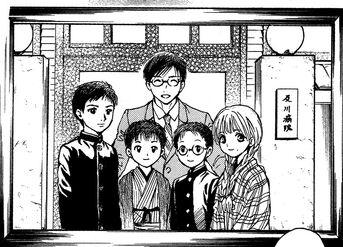 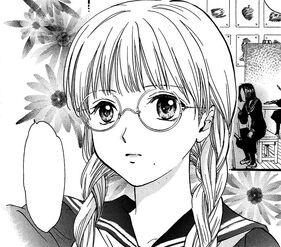 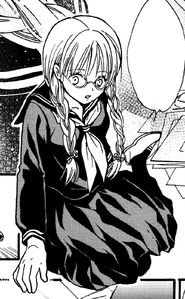 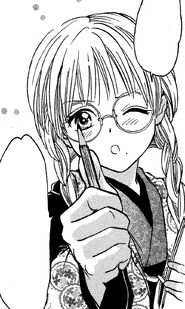 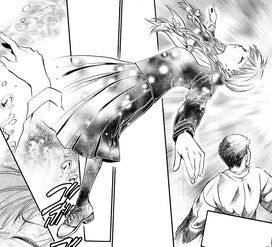 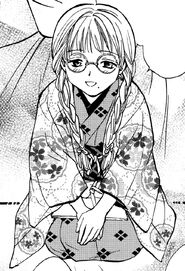 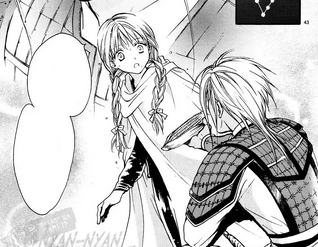