"Ya didn't run off when ya saw those wolves just now. You've got some serious spunk fer a girl, doncha?"
—Tasuki to Madoka on their first meeting 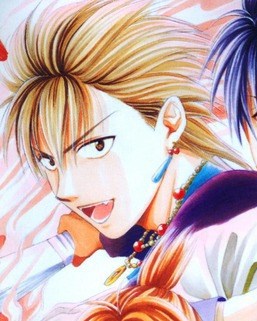 Just like in the anime/manga, Tasuki makes his first appearence inside of Mt. Reikaku.

After Madoka and her team of celestial warriors have been captured, she is taken by the mountain bandits towards their leader, who supposedly stated that they bring him any girl with weird clothing. Madoka accepts to go with them since she has a feeling that a celestial warrior is hidden in the mountain. However, on their way they meet up with another group of men who aren't bandits. After killing the mountain bandits that were accompanying Madoka, they try to take her as well, seeing that she is the Priestess of Suzaku.

Just when it looks like Madoka's life is in danger, the men are attacked by a pack of wolves, that suddenly turn into paper after attacking the men. At that moment, Tasuki comes running in to check on the slain mountain bandits and paying no attention to Madoka. Once she does get his attention, he introduces himself as "Genrou" and asks for her help in overthrowing the bandit that took over as boss of the mountain bandits while he was away looking for some medicine for the old boss. In order to do so, they must recover the harisen. Madoka accepts because she needs to save her friends who are being held hostage as well in Mount Reikaku.

Tasuki and Madoka's kiss the night before the summoning ceremony

Tasuki and Madoka together in Madoka's world

Tasuki and Madoka as bandits
Add a photo to this gallery

Retrieved from "https://fushigiyuugi.fandom.com/wiki/Tasuki/Suzaku_Ibun?oldid=16651"
Community content is available under CC-BY-SA unless otherwise noted.