Fushigi Yuugi Wiki
Register
Don't have an account?
Sign In
Advertisement
in: Characters, Male, Celestial Warriors of Seiryuu,
and 6 more

"The boy's screams excited me far more than yours."
—Tomo

Tomo (智) is one of the Celestial Warriors of Seiryuu. His real name is Ragun, and was born under the constellation root.

Tomo's appearance is heavily influenced by Peking/Beijing opera. The makeup he wears is a direct nod to the heavily-painted look of the "Jing" role, the mighty or fierce character typically seen in the genre. Black stands for integrity, white is for craftiness or cruelty, red is for loyalty, and blue stands for stubbornness or persistence.

However, Tomo's headdress evokes another opera troupe: the Sheng role, specifically the "Wuxiaosheng," a young general character with militaristic skills. "Wuxiaosheng" characters can be identified by their ornamental crowns affixed with two long pheasant feathers called "lingzi," which Tomo uses as weapons.

The combination of the two roles could allude to his backstory. Tomo, a known Peking Opera performer, could have played the young, heroic role of the "Wuxiaosheng" before learning of his identity as a Seiryuu Warrior and being corrupted by power, turning him into the monstrous role of the "Jing."

Tomo usually does not know how to get along with Soi and avoids her. He appears as sadistic and cruel, except he occasionally loves Nakago, and therefore this makes him a faithful follower. Very much like Soi, Tomo has no wish to harm Miaka. Tomo only fights for the sake of his love for Nakago.

He seems to take great delight in torturing people - Tamahome, Miaka, even Nakago himself by hinting at his past. He uses the shell, "Shin" to control and manipulate worlds, and manages to confine the Suzaku warriors in a pretend city as well as convince Miaka that her time in the book was all just a dream. He forces Tamahome to suffer at the hands of his magic and even goes to assault Miaka because it's something that will help Nakago - even though he has no interest in women, he seems interested in her reactions to his torture, and he is also creepy. He is possibly the most manipulative of Nakago's entourage.

Tomo even personally states that he also has a bit of liking in fashion and looks, after Tamahome asks if he is okay with his looks. Tomo however answers yes and therefore he gave a sign of vanity. Also, in the omake Tale of the Forbidden woman's hot spring resort, he is briefly seen holding a make-up mirror. This is the second time he gives out a sign of vanity. It is revealed that Tomo values the privacy of his past more than Nakago. Tomo tortures Nakago for hinting at his past in the 1st OVA.

Tomo seems to be a cold, conniving, totally evil character at first glance, but upon looking beneath the

surface, it is possible to see that most of that impression is an illusion created by a gifted performer. At a young age, Tomo was abandoned by his parents and taken in by a street dancer. To survive he had to learn that life was harsh and cold, and that if you didn't get the job done yourself, it might not get done at all. Sometime after, Tomo joined a traveling opera troupe, most likely playing the Jing character type, a strong-willed male character who wears greatly exaggerated facial make-up. Here he learned to perform; maybe one time an important general and another time a scheming politician. To create, through costuming, make-up, gesture, and voice, the "illusion" of being that character. Something never seen, because we are never allowed inside Tomo's head, is the fact that Tomo is shy. So, the ability to transform from a shy, street dancing pauper into the feared and adored war general is a great ability indeed. Something the younger Tomo probably embraced. Then, somewhere along the line, Tomo learned he was a Seiryuu Seishi... someone of power and status... he could finally become the illusion, the man of power. Add into that equation his Seishi ability to physically manifest illusions. To capture people within them and populate the illusion world with an infinite number of alter egos. Add in a touch of telekinesis and the Seiryuu seishi Tomo has an arsenal of weapons to use on anyone who would think to push him down again. Enter Nakago, the Seiryuu seishi self-appointed leader. Also from a reviled past, he had overcome all that to be the efficient, respected war general of Tomo's opera roles. Quite worthy of Tomo's respect and homosexual attractions. Tomo is gay, a fact somewhat glossed over in the anime,and he was attracted to Nakago but that was never mentioned in the anime for unknown reasons. Anyway, for Nakago's own reasons, he did accept Tomo as an equal,worthy of discussing strategies against the Suzaku warriors and so on, a position no other seishi is seen to occupy. And given Tomo's, somewhat subconscious, feelings for Nakago, he was placed in direct opposition to fellow Seiryuu seishi, Soi. Now, probably due to being in the company of men his whole life,from the streets to the opera troupe, Tomo has a dislike of women. He is generally cold to them, but he can still work with them if need be. Soi is just a rival for Nakago's affections "professionally".

He is the illusionist among the warriors, allowing him to hypnotize opponents and create illusions involve various senses, additionally being able to put himself into the illusion as a sort of actor to help things along. Employing a clam shell called Shin, Tomo is able to see his illusions as the unfold and also trap a person's body and mind within it in order to extract their memories. The extracted memories can be used to create a scenario for the victim or be replayed at a later time. Tomo also possesses telekinetic powers over objects, bending them to his every whim. This is normally seen through his manipulation of the long feathers located on his headdress.

Tomo's one-shot published in Perfect World magazine. It details his backstory and life in his traveling Peking Opera Company. Outside the cover, the text of story itself has been lost and/or not translated.

Tomo's role in the light novel is minor but poignant to Nakago's character development.

Tomo first appears when Yui and Suboshi were going to Sairou and were resting. Suboshi then holds Yui's hand and kisses her, Yui tries to resist but fails. Tomo then appears on a tree, telling him that he was not allowed to touch the priestess while the two of them were alone.

Tomo next appears when Soi and Tamahome were toghether, Soi disguising as Miaka. When Tamahome discovers that it was Soi, he quickly sees Tomo and says that he has a very unusual appearance and asks that if he's comfortable with it. Tomo said yes, and referred to Soi and said that she was a great distraction for men.

Tomo dies while he was trapping Miaka into his illusion world, when Suboshi kills him.

Tomo plays a minor role in yet another light novel by assisting Nakago in his spirit form to protect Seiryuu's Shinzaho from the demon god, Tenkou.

Despite he was killed on the anime series' run, he reappears in the first anime OVA where he created the illusions and a woman named Kaen to poison Tamahome with a kodoku at his wine when he returned back inside of the book and being called as the late Nakago who he had killed at the end of the series and it was revealed that he was working with Tenkou as the souls of the Seiryu Seven such as both Nakago and Suboshi sensing his threat due to their current priestess of Seiryuu, Yui becoming the next priestess of Genbu. 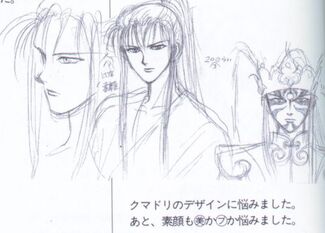 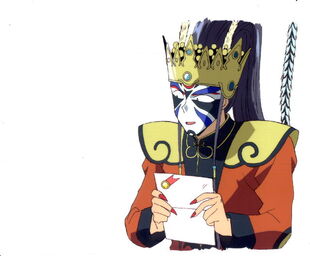 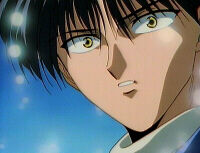 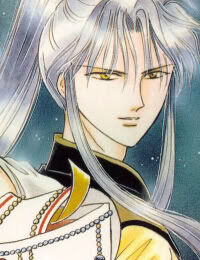