"You will never understand what I went through!"
—Yui to Miaka

Yui Hongo (本郷 唯 Hongō Yui?) is the best friend of Miaka Yūki and the Priestess of Seiryuu. She is considered to be the smartest student in her school and is content with what her future holds: a spot in a competitive high school. Unfortunately, her plans are halted when she is summoned into the Universe of the Four Gods.

Yui has blonde, cropped hair with bangs, pale skin and light blue eyes. In the manga, it is revealed that she once had longer hair but cut it in order to avoid unwanted attention. Her hairstyle changes to a grown-out bob in later chapters/episodes.

Her fashion-sense is more practical when she is in her school uniform, which is a standard brown blazer and skirt with a white dress shirt and blue ribbon, white knee-high socks and black flats.

When summoning Seiryu before he enters to her body to gain his power to be granted in three wishes and like Miaka, Yui wears a cultural Chinese outfits and as a contrast to Miaka's ceremonial outfit and Yui's ceremonial outfit is shown to be revealing. She wears a capri blue and white long sleeved top which exposes both her cleavage and midriff with a dark blue collar and gold linings adorned with a lavender ribbon at the edge of her top, connected in each sleeve resembling a celestial robe and white frills in each of her sleeves, a white skirt that reaches below her knee and long at the back and it was adorned in sky blue laces at the waist of her skirt and blue ceremonial flats. Yui does not wear a make up while wearing this outfit. But she was accessorized with gold danggling earrings in each ear and a gold necklace adorned with a red oval pendant on her neck. The color scheme of Yui's dress is in different shades of blue signifying her allegiance to Seiryu and the Seiryu Seven.

In the OVA version, Yui now wears a standard uniform like Miaka's.

Yui's personality painfully revolves around contrasts and conflict. Though at first glance she seems prim, intelligent, mature, smart, and sensible, her faith in people is so easily shaken. She trusts Miaka very much, to the point that she even doubted Nakago's lies; but nevertheless as time passed by she was able to believe it. It shows that she is the kind of person who can be fooled with persistent pressing. Yui seems to be ruthless and cold at sometimes but when she finds trustworthy people she begins to act kindly and later opens up. At the true gist of her heart, she is a very kind, compassionate and caring person and she uses her authorities as a priestess well-fit. She has her faults: the priestess of Seiryuu easily breaks down and resorts to tears and she may tend to overreact and be angry when her emotions get the best of her. To her enemies and to those who betrayed her, she is ruthlessly cynical. Being aware of her capabilities and acting normal makes her seem admirable, particularly with Suboshi.

By the time the later manga/OVAs run, Yui has matured considerably and has developed a rapport of her own with Tetsuya, Keisuke's friend. When she refers to her experiences in the book world, she refers to her silliness and jealousy, and her loyalty to Miaka is absolute by this point. Although enemies such as Shigyou Renhou try to manipulate her occasional jealousy of Miaka's relationship with Taka, she still remains loyal to her friend this time around. However, her preoccupation with the real world over the book world is still overriding - she is always cross when Miaka goes into the book world or spends too long focusing on what's going on in there.

Yui Hongo (本郷 唯, Hongō Yui) is the Priestess of Seiryū (Seiryū no Miko). An intelligent and mature girl, she is a tenth-grade student and Miaka Yūki's best friend. A passionate person at heart, she tends to see the world in black and white terms and is easily infuriated with perceived betrayal. Yui is confident and bold in everything she does but longs for someone to take care of her.

Yui is initially transported to "The Universe of the Four Gods" with Miaka, but almost immediately returns to the real world and becomes the one who reads the book in order for events in the world to progress. However, she becomes trapped in the book while trying to help Miaka return to the real world.

Afterward, bandits capture Yui and knock her unconscious. When she regains consciousness, she believes she has been raped and, distraught, attempts to kill herself. Nakago rescues her and convinces her that Miaka is responsible for Yui's misfortunes, leaving Yui unaware that he had saved her before she had been raped. He manipulates Yui into becoming the Priestess of Seiryuu, convincing her that it will allow Yui to take revenge on Miaka. She eagerly agrees, swearing to fight Miaka and to take away her lover, Tamahome, whom Yui has become attracted to.

After succeeding in summoning Seiryū, Yui uses her first wish to seal away Suzaku's powers, preventing the god from being summoned and the Celestial Warriors from using their powers. Her second wish is to take Miaka and herself back to their world, hoping to separate Miaka and Tamahome, but Tamahome also arrives in their world with them. When Yui finally realizes that Nakago has been manipulating her for his own ambition and revenge, she is too late to stop him from doing any more harm, especially as she cannot help but witness hopelessly and helplessly in horror and shock, upon the death and destruction of her own world right before her eyes, friends, and family alike, including her best friend Miaka and her love interest Tamahome. Hence, consequently, in her deep regret and remorse, she makes her own ultimate self-sacrifice and redemption with her third and final wish, in order to repeal the seal on Suzaku, letting Seiryū devour herself, and begging Miaka to protect their dear world at all costs. Hence, after summoning Suzaku, Miaka uses her first wish to rescue Yui, and her second wish to seal Seiryū away, which finally allows Tamahome to defeat and kill  Nakago once and for all. Afterward, both Yui and Miaka make amends and renew their friendship with each other once again.

After the events of the "Universe of the Four Gods", Yui enters a long-term relationship with Tetsuya Kajiwara, a friend of Keisuke Yūki, who fell in love with her while following her journey when reading the book.

When Tenkou is revived after being sealed away by the Four Gods for centuries and threatens to cast great calamity and chaos upon both worlds of Miaka and Tamahome, Yui decides to help them out, as her way of redemption, repentance, and determination to make sure that everyone is really happy and free. She even puts herself in the line of fire sometimes in order to do so. In the end, she finally relieves and redeems herself of all her past pain and sorrow, as she sees that all is well in the end.

"I wish for your love...only this one thing: I want to be loved more than anyone else."
—Yui in I Wish

Both Yumi Touma and Yamazaki Wakana lent their voices to Yui's Vocal Collection, a compilation of songs sung by the tragic and intelligent priestess for the Fushigi Yuugi Soundtrack in both the anime and drama CD. 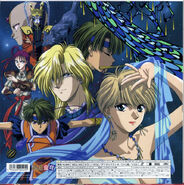